Backups are an integral part of any operating system. They ensure that critical copies of data are always available in case a system crashes or something goes wrong.

Urbackup is an efficient and easy-to-use client-server backup system for Linux and Windows systems. It is a fast and reliable Linux backup tool with a web interface that allows you to add clients whose files and directories need to be backed up.

Urbackup uses deduplication to store backups on Windows or Linux servers. Backups are created invisibly, without interrupting other running processes on the system. Once backed up, files can be restored via the web interface, and disk volumes can be restored using a bootable USB drive.

In this guide, we will show you how to install Urbackup and perform a backup on Ubuntu based distributions.

Setting up the test environment

To illustrate Urbackup in action, we will have two nodes, as you can see below.

Step 1. Install Urbackup on the server.

So, login to the server and update the repositories.

Next, install the following dependencies, which will be required during the installation.

The default urbackup server is not provided in the Ubuntu repositories. So we are going to install it from the PPA provided by the developer.

After adding the PPA to the system, update the repositories again and install the urbackup server.

Along the way, you will need to specify the path where your backups will be saved. The default path will be /media/BACKUP/urbackup. This works great and you can also provide your own path. In this case, we will go to the default path, press the TAB key and press ENTER. 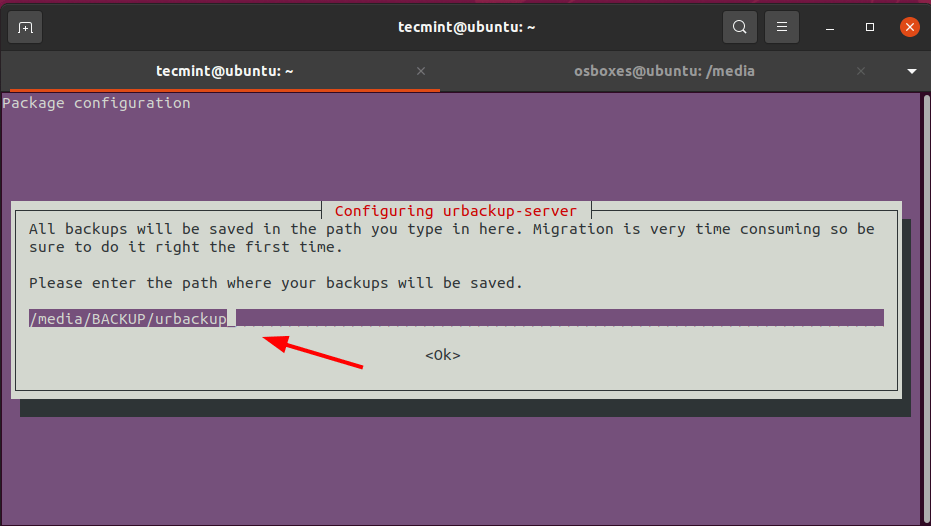 Once installed, the Urbackup service starts automatically. You can confirm this launch by running the following command.

The output above shows that the service is up and running. You can also enable it to run on system startup as follows.

The Urbackup server is listening on ports 55414 and 55413. You can confirm this with the ss commands:

You can now access the Urbackup web interface by viewing your server’s IP address. 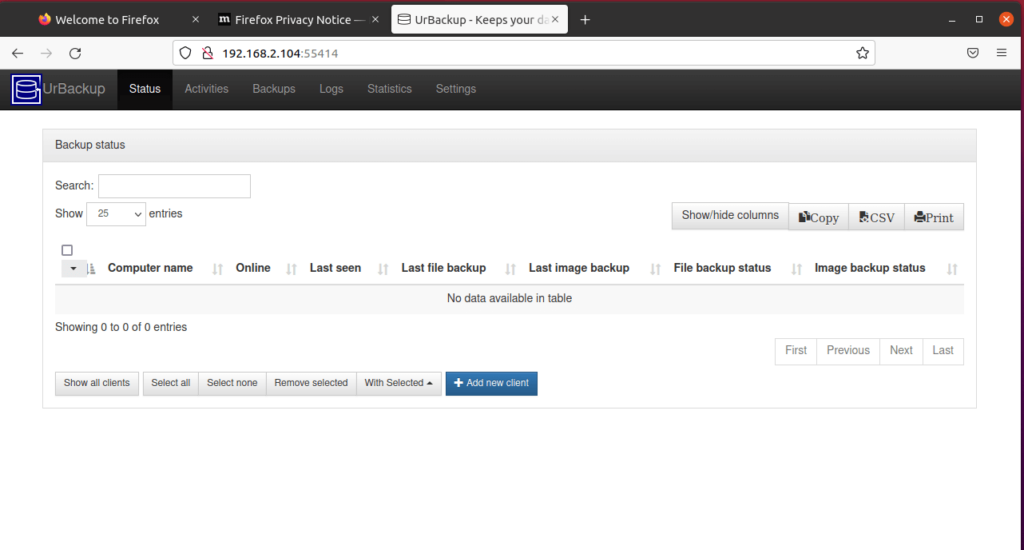 Step 2: Create an admin user on the Urbackup server

Urbackup installed successfully, but is available to everyone as no authentication is required. In this step, we will create an admin user for authentication.

After that, the user will be listed on the toolbar as shown in the figure.

After successfully installing the UrBackup server, the next item on the list is adding a client whose files and directories will be backed up on the server.

To do this, click the “Add a new client” button.

On the page that appears, click “Add New Internet/Active Client” and enter your preferred name for the client. Then enter the IP address of the client system and click Add Client. 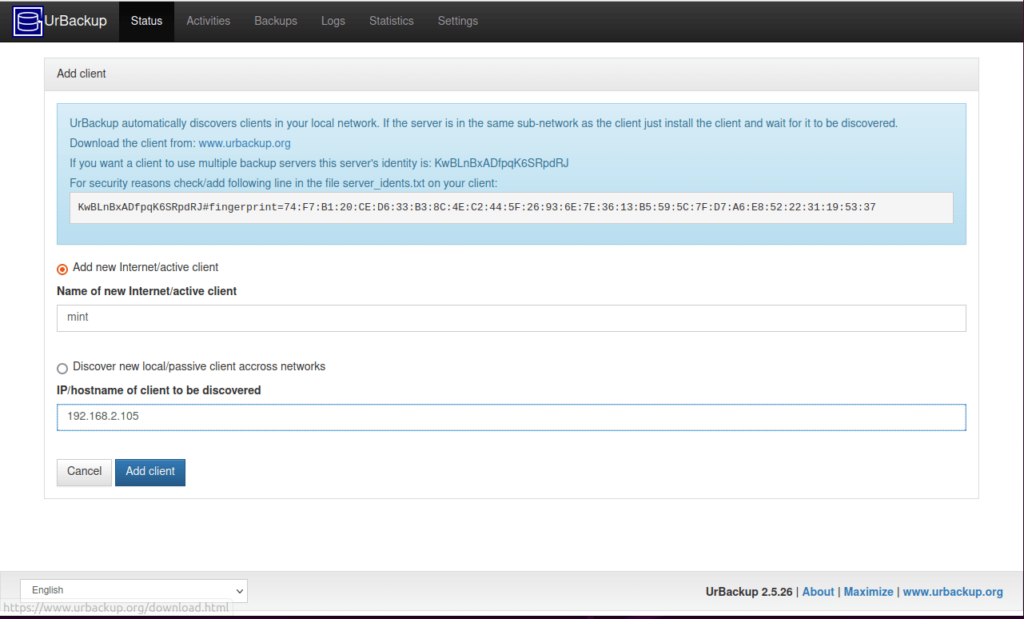 The command to be executed on the remote client’s system will be displayed as shown. 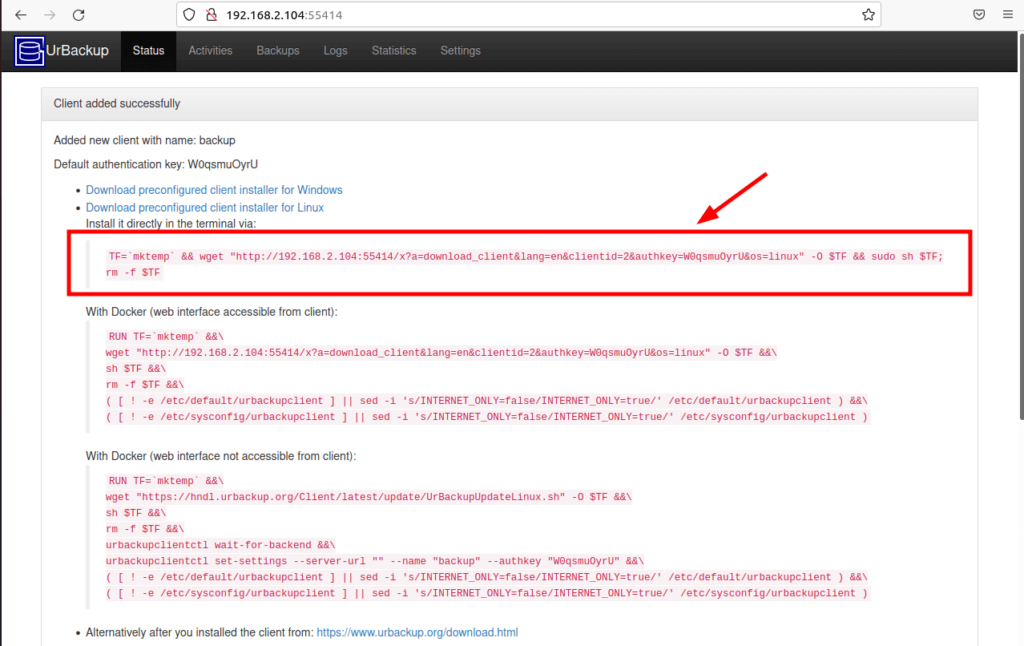 Running the command starts the Urbackup client service. You can check its status as shown.

The next step is to set up a backup. On the client system, we will create a backup of the home directory by running the following command. Feel free to provide your own preferred directory.

Now go back to your Urbackup server and you will notice that the client system is listed as online. Now you can start the backup manually, otherwise the backup will run according to the default schedule.

Shortly thereafter, you will receive an “OK” status indicating that the backup is complete.

To confirm that the backup has been created, go to the Actions tab and you will see detailed information about the backup.

In addition, you can click “Backups” to view detailed information about the file backup.

In this tutorial, we installed and configured Urbackup on Ubuntu-based distributions and installed the client service on the client computer whose home directory we backed up.

previousWhat are nutritional supplements?
next10 cute tattoos that are perfect for hiding scars